Monsters and Ghosts of the Far North, by Andra Pop-Jurj and Lena Geerts Danau, departs from the spatial manifestations of the social, economic, and geopolitical conflicts in the Arctic region caused by environmental degradation. Andra and Lena shared more details about the project’s development and what they hope to reach with the research. 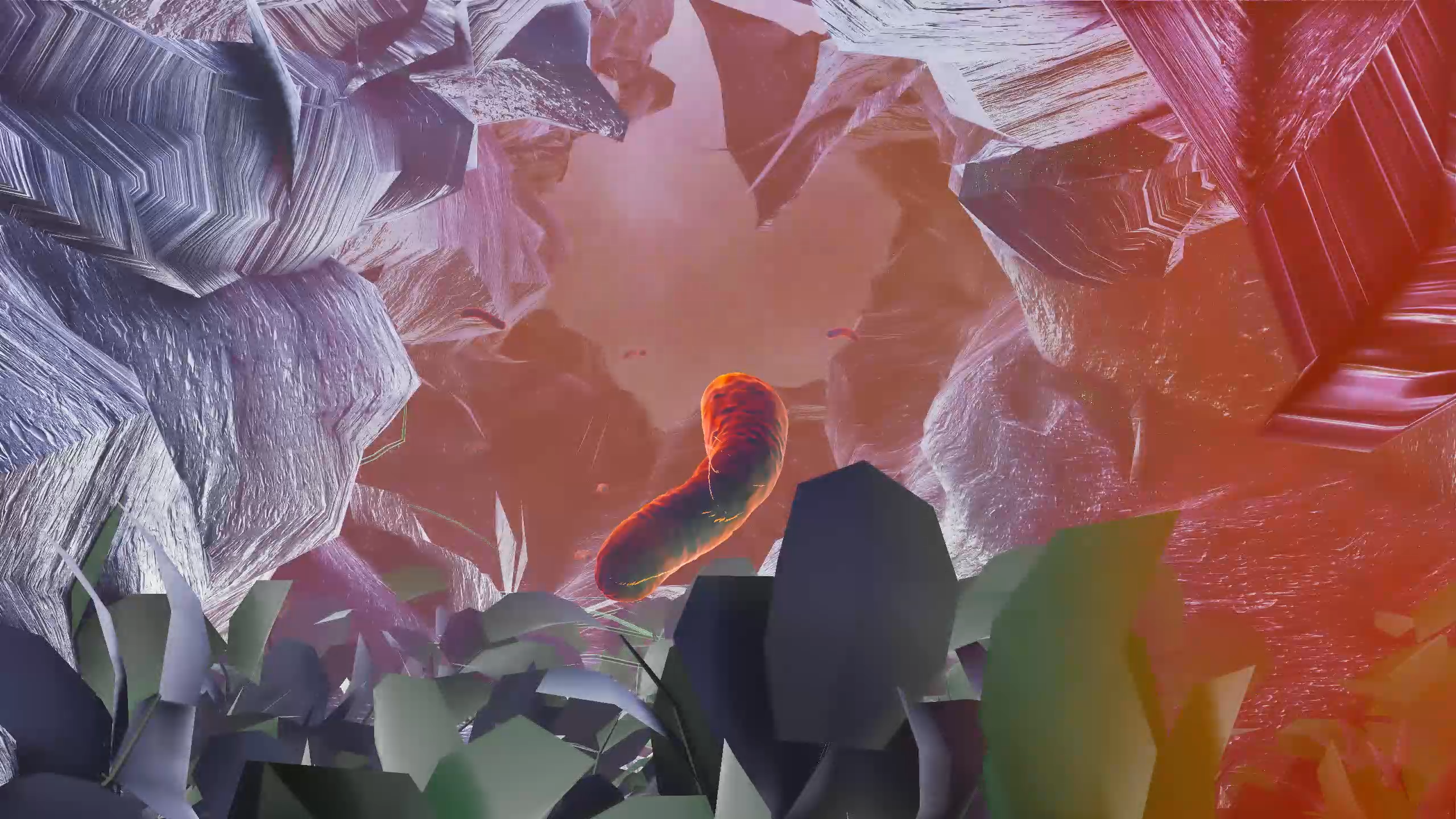 When and how did your project start?
The project started in April 2021 while both of us were nearing the end of our Master’s degree in Architecture at the Royal College of Art, London. Given the institutional framework of an architecture degree, particularly in the UK, we were not able to collaborate on a joint project despite our similar and very complementary topics for our Masters theses. This prompted us to combine our interests in a joint application for Driving the Human in our spring break and just before our final university deadline. The open call seemed to ask all the right questions and we saw a huge potential in developing our focus on multispecies entanglements, cohabitation and geopolitical conflicts of the Arctic region within such an enriching framework and outside of the academic limitations of educational institutions.

Which stage is the project in?
This proposal and body of research started from studying the social, economic and geopolitical conflicts in the Arctic region which are triggered by environmental degradation. We realized very early on that this region is not only undergoing severe environmental changes, it is also a site of intense geopolitical and infrastructural intrigue, with incompatible and interlocking borders claims rooted in colonial and cartographic history. The cartographic artefacts we came across as part of our research are, however, very flattening and exclusive and fail to capture the dynamic nature of the Arctic. We then identified a need for an alternative representation of the spatial manifestations of these conflicts.
To achieve this, the project employs trans-temporal and interscalar worldmaking techniques. It uses both data and narrative to visualize global aspects as well as different meanings and histories of several agents living in this environment. Using this methodology, we hope to challenge and refine the predominant narratives of the worlds we live in.
At this stage we are trying to figure out how a game engine can support an interactive experience and in this sense help us inquire into modes of multispecies cohabitation and negotiation of space. With the use of this medium, we hope people can extend themselves in time and space, and imagine other futures in the dynamic landscapes of the Arctic region.
Currently Monsters and Ghosts of the Far North questions existing notions of sovereignty and challenges the permanence of national borders and the primacy of the nation state. It does this via the hypothesis that interactive mediums can work as a tool for decentralization of knowledge and as a tool for rethinking how we can categorize and visualize the world in a more inclusive way. Thus, our aim is to critically engage with the interconnectedness of the social, economic and geopolitical conflicts in the Arctic region and construct an alternative more inclusive cartography, in which the perspectives of several non-human and more-than-human agents challenge our  current jurisdictions, predominant narratives and modes of representation. 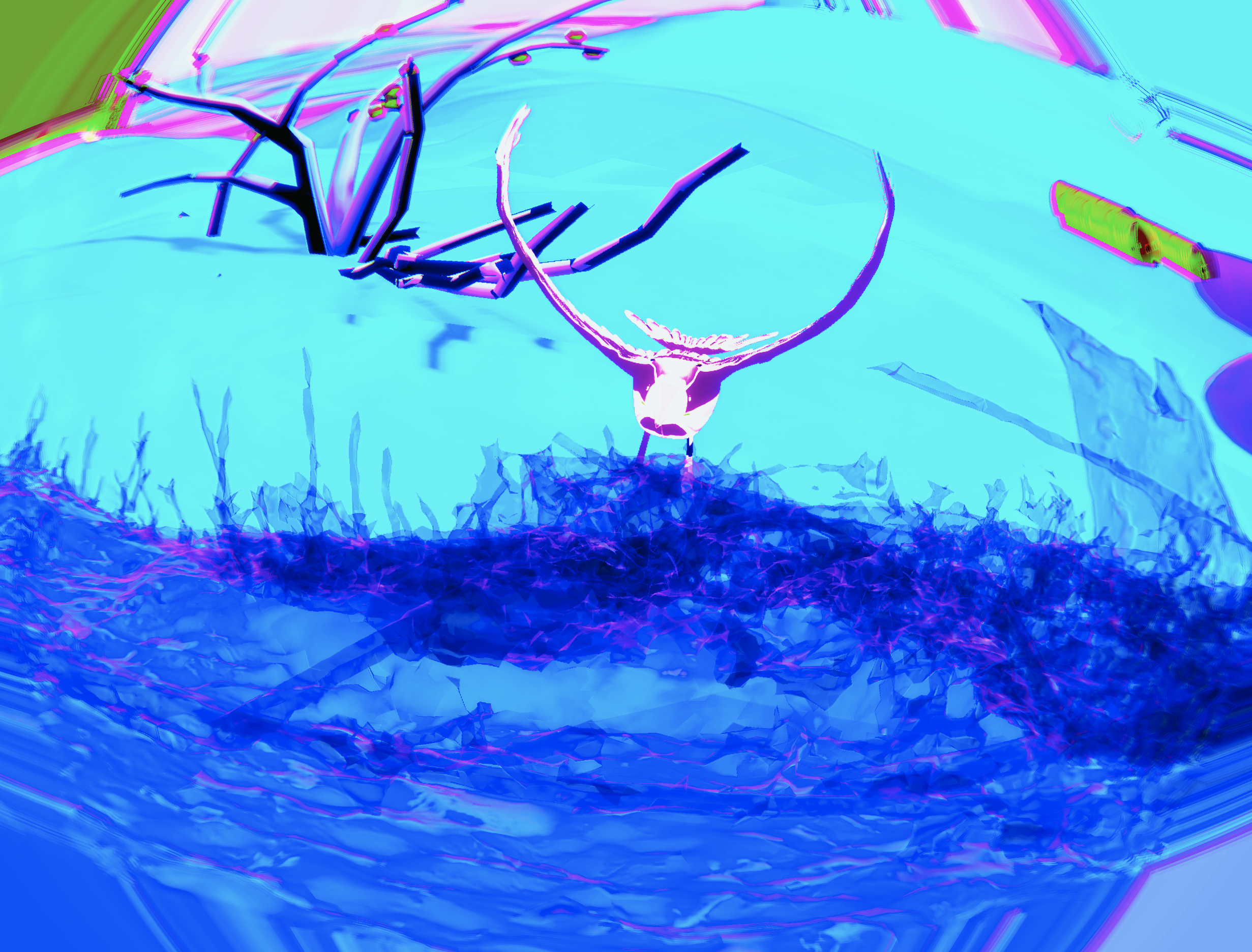 In this phase of your research, what are the two most important aspects of the project?
One of the most important catalysers for the project are the multispecies entanglements that form the core of our research. Our understanding of what makes us human is rooted in the symbiotic relationships between and within species. Therefore we are proposing an interactive experience in which one can experience a shift of perspective by impersonating a non-human agent. The characters we have identified so far are an Ice island, a Methanobacteria, an Arctic Tern, an Arctic Cod, a Reindeer, a Crater and a Machine. We are interested in these monsters, who live in the landscapes haunted by the violence of modernity, which we refer to as ghosts. The entangled narratives of these characters form the concept of Monsters and Ghosts and represent multiple human and non-human biomes that form monstrous relationships and become the subject of the proposal.
Another representative aspect of our project is the interactive experience we are designing to tell our story. As part of this, we are searching for an alternative mode of representation of the topics we are addressing. We are currently doing this via a combination of mapping techniques and digital environments in combination with interactive elements. Merging these does not only enable us to deliver informational depth, but also to reimagine the translation of this information into an experience. Concretely, this means that the project is rooted in scientific data while constantly questioning how this data is being delivered and perceived. Within this immersive experience, we apply worldbuilding as a vehicle for imagining new ways of engagement across species and with environments. Through this medium, we hope to extend ourselves in time and space and imagine collective futures in the dynamic landscapes of the Arctic region.

What are the next steps in the research?
Our architectural thinking and education enables us to critically engage with various fields and bring them together under the umbrella of one concept. Compiling several elements from all these different fields will allow us to juxtapose various pieces of information and show them in a different and perhaps unexpected way. None of them happen in isolation from each other so our vision is to research and design with this in mind. We thus use our architectural background to establish a practice that looks for innovative ways of combining several fields in a mutually enriching way. This is also why we think our project can definitely benefit from the framework of Driving the Human, which is a catalyst for experimentation and interdisciplinary knowledge exchange. Working within such a framework will render more depth to our research and concept proposals.
Moving forward we hope to collaborate with experts in geology, geography, animal behaviour, microbiology, law, anthropology, game development and environmental science in order to create a framework in which the current geopolitical, social and environmental conflicts and issues of the Arctic are represented. The intention is to combine their knowledge in creating an accurate simulation based on live data within the digital environment.
Further, we aim to design a video game experience and further explore alternative modes of representation in our critique of existing flattening cartographies, such as two dimensional maps of territorial claims which do not take into consideration the lives of all agents living on those grounds.

What are the limits and challenges of your research?
The project looks for a creative way to communicate the social, economic and geopolitical conflicts in the Arctic region. Through experimentation we decided to use the medium of the game as a tool to communicate our research, it has the capacity to make the experience of the events interactive and in this sense more approachable. We hope this interactivity aspect will contribute to a better understanding and more action but this also poses some challenges. One of them comes from the endeavor of striking the right balance between the design of an immersive, aesthetic experience and an accurate delivery of such extensive research. All this while wanting to make the best use of the educational potential of a gaming environment.
Another vital aspect for us is the question around data representation. Game engines can merge both the experience and delivery of information, thus they are the perfect medium for our goal. However, visualizing data accurately is still a technical challenge for us. Therefore, collaborating with game developers and scientists is crucial in order to bridge the gap between science and art.
We hope to employ expert knowledge from the field of science in creating simulations of environmental changes and phenomena. At the same time, visualizing these through the game engine, frees us from the rigid frameworks of scientific models and their modes of representation. This brings us to another challenge, which is the creation of a productive prototype that combines science and technology in a way that breaks the distance between the player and the game’s actual site. By doing this, we hope to show that the changes happening in the Arctic region have global implications.
Ultimately, we want the game to be run by these environmental changes as they happen in real life. In doing so, we take away the agency of the player, who is normally always in control in a game. This, together with vicariously experiencing non-human characters, acts as a disruptor of our anthropocentric perception. We thus see the game environment as a testing ground for alternative forms of representation, in which we do not radically separate humans from non-humans but find a way to live collectively.