“These notions of cohabitation could make us change the way we live, becoming more collaborative and less competitive”

RUM_A: Multispecies Urban Refuge in Cluster is a project about the importance of consciously and dialogically coexisting with other living beings as a strategy for survival and reversal of the anthropocene. Its author, Clara Acioli, gives us an overview of the development process and next steps of the project. 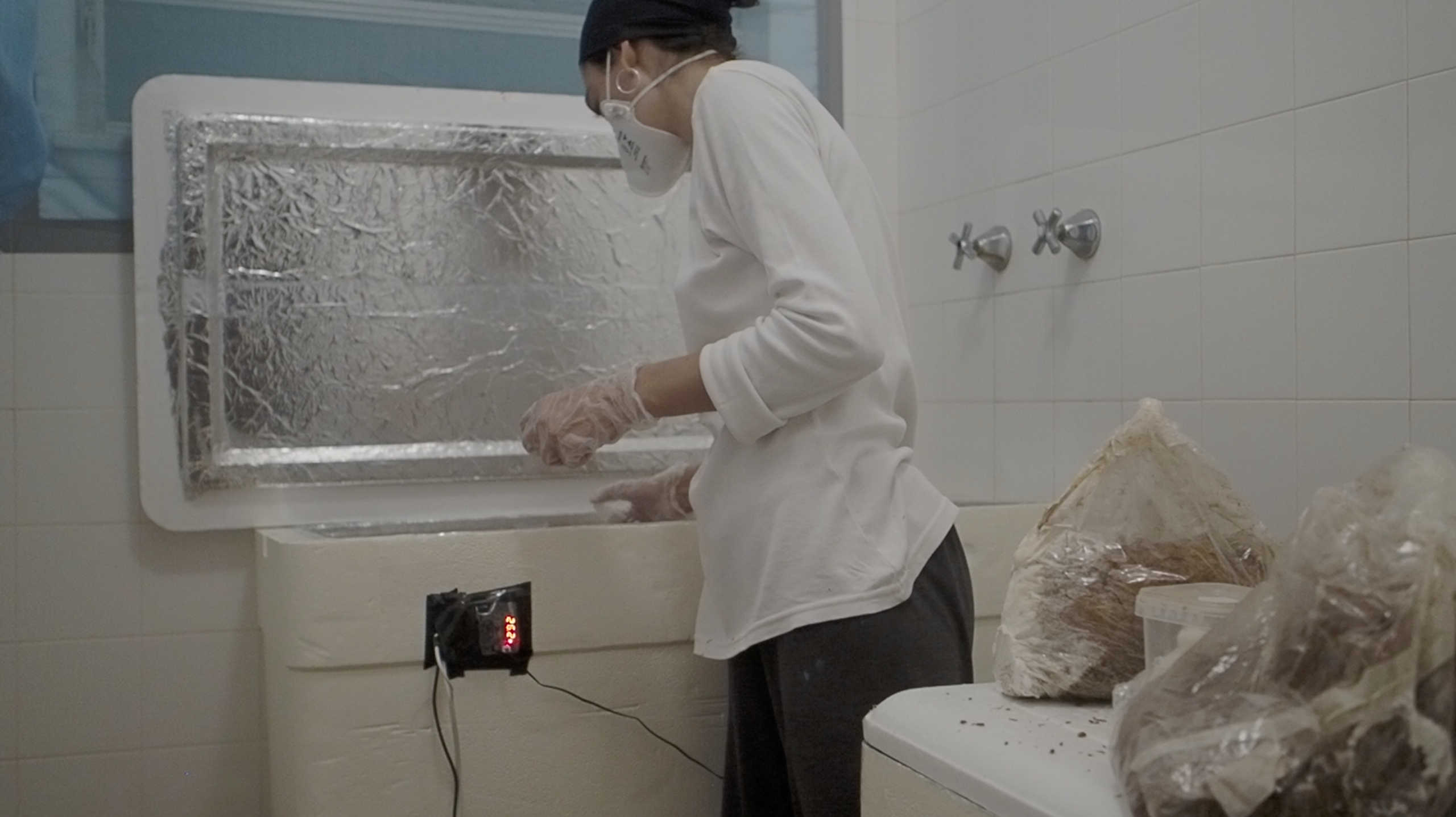 When and how did your project start?
The project started in 2020 and was developed during the Covid-19 pandemic. Since 2018, I have studied and experimented with biodegradable materials in the NANO lab at the Federal University of Rio de Janeiro. In 2019, I started my collaboration with S.H.A.S.T, a project coordinated by Malu Fragoso, and in the scope of this project, I began my research about bees and pollinator insects. I fell in love with the native stingless bees and their importance to the Brazilian ecosystems.
RUM_A started when I had to initiate my own project to finish my graduate degree in product design. I knew I wanted to embrace my research about materials and environmental issues. At this time, I was studying materials with/from fungi, and I’ve noticed that the properties of the mycelium composite matched well with the habitat needs of the native bees I was interested in.
Researching further, I’ve found Paul Stamets’s survey about fungus and bees, and then Donna Haraway studies about making with non-human companions; Anna Tsing studies about multispecies landscapes in the anthropocene and so on. My final project advisor, Jeanine Geammal, is very into anthropological and contemporary studies. So we started reading about the multispecies studies, coexistences of humans and non-humans, and other authors reflecting on possible ways of postponing the end of the world (Krenak, 2019).

What is the profile of the project collaborators?
This question is interesting because I’m experimenting with various species, and some of the project collaborators are non-humans. The fungi Reishi (Ganoderma lucidum) and the Stingless bees (Meliponini tribe) in this case. The Fungi participates actively in growing and connecting the substrate offered. With the bees, the process is more passive, mapping, identifying, observing and some attempts of approximation with the materials samples and smells. About the human collaborators, I would say that I’m always trying to bring together people from different areas of study, connecting art, science and technology. Probably significantly influenced by the NANO lab that I worked for so long, which taught me how rich these multidisciplinary and diverse ambiences are.

Which stage is the project in?
The project is in the prototyping and testing stage. In the past months, I’ve been experimenting with the mycelium composite material and making the first real-size prototype of the first version of RUM_A, which was conceived in the Brazilian Atlantic forest and intended to bring together Fungi, Stingless bees, urban humans and a native plants. Meanwhile, I’m testing the acceptance of the stingless bees Jataí (Tetragonisca angustula), Iraí (Nanotrigona testaceicornis) and Mirim (Plebeia spp.) with the Reishi mycelium composite. I’m also continuing the concept studies and experimenting with ways to communicate the project, the processes, and induce the making of Multispecies Urban Refuges in other contexts. Since I’ve entered the Driving the Human project, I’ve also had the opportunity to collaborate with more people, mainly for making the video that presents a bit of the project. 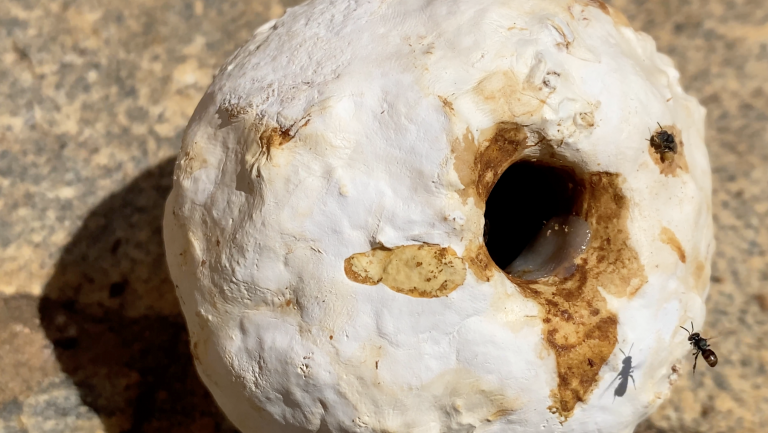 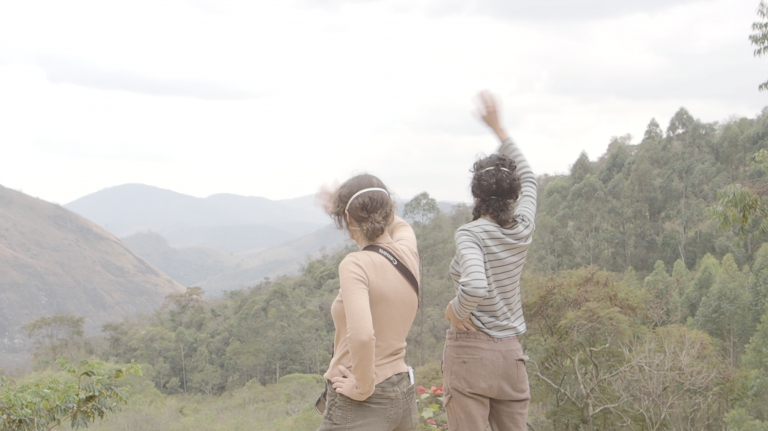 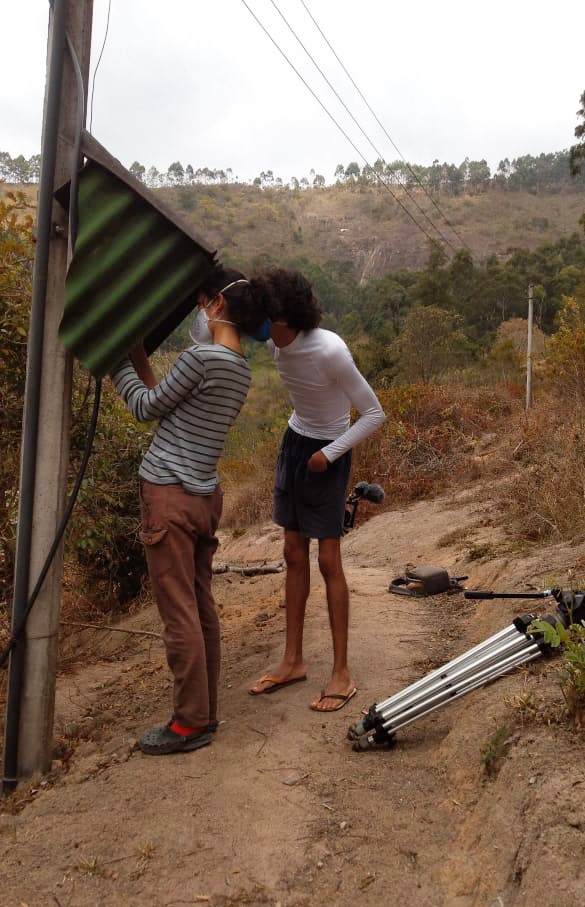 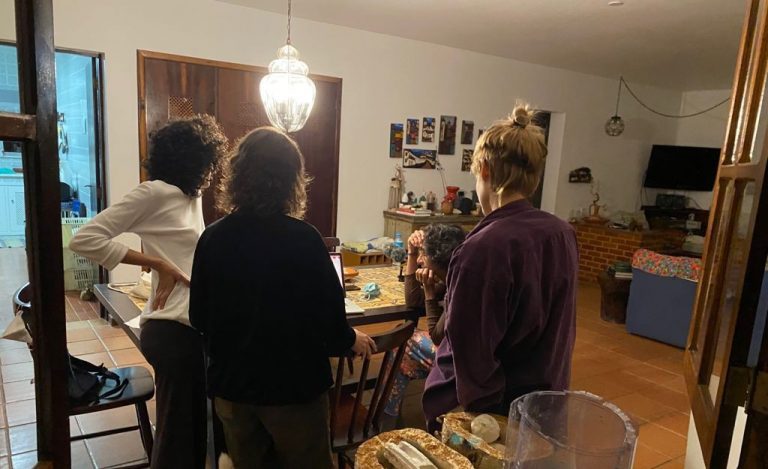 In this phase of your research, what are the two most important aspects of the project?
The effort for more conscious connections among humans and non-humans that coexist and how the project could help in this attempt to enchant and inspire urban humans with other forms of life. I believe that these notions of cohabitation, interdependence, and humans are part of this live organism (Earth, or Gaia, or Urihi a, etc.) could make us change the way we live and become more collaborative and less competitive. We will need a lot of movement; RUM_A is just one idea inspired by other thoughts and wishes to inspire a lot more.
The other important aspect is the involvement of other humans in the project that made me realize how this matures and enriches the processes in terms of concept, productiveness and scope.

What are the next steps in the research?
Linking with the previous question, the following desirable step is to form a multidisciplinary team-lab to research and experiment with possible RUM_As, bringing together artists, biologists, social scientists, material designers, and who else could be interested.
For this version of RUM_A, the next step is to continue the experimentations and testings with the bees and the mycelium to ensure the composite material works as a safe structure for bees to nest. Also, it is essential to pay attention to the reactions and feedback of humans who enter this multispecies cluster to be more aware of the project’s potential and how it could develop effectively.