ON PROTOTYPING AN AMBIENT LIVING INTELLIGENCE 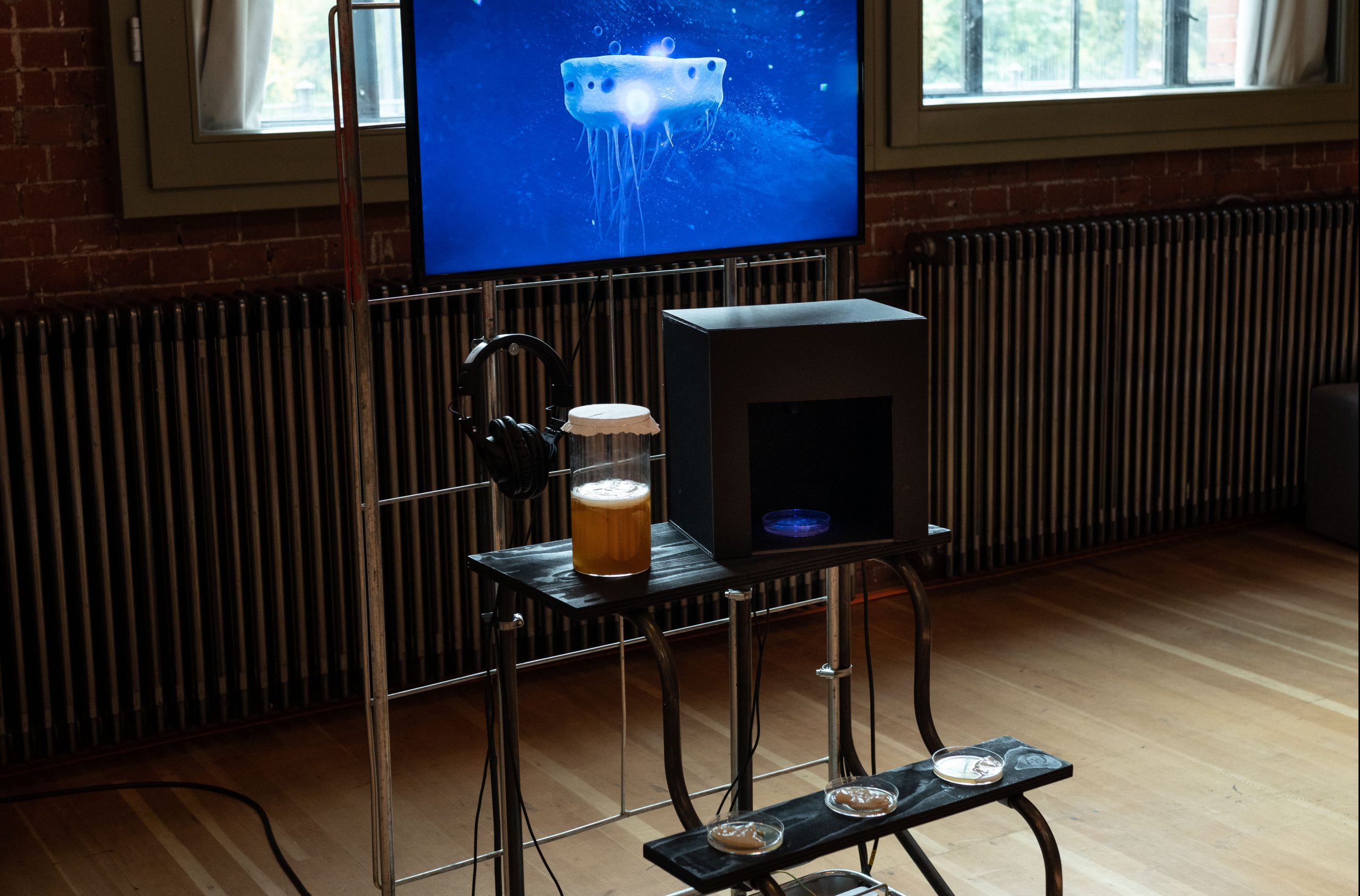 Presentation of Human Bacteria Interfaces at the Driving the Human Festival, October 2021

“ALI” is an Ambient Living Intelligence, a sensor prototype currently developed by Anne-Sofie Belling, Bea Delgado Corrales, Romy Kaiser, and Paula Nerlich, who imagine the future of human bacteria communication as integrated within our homes.

The sensor is based on a living material called Scoby, a symbiotic culture of lactic acid bacteria, acetic acid bacteria and yeast, created through a fermentation process. Currently the collective is working on a Life Support System to keep the organisms alive, which Belling, Delgado Corrales, Kaiser and Nerlich describe as “very close to a bioreactor just designed for your home environment.” The team behind Human Bacteria Interfaces imagines a sensing device that cohabitates our living spaces through being integrated in our built environments. This communication architecture is supposed to enable us to notice environmental changes and microbial interactions invisible to our eyes. One way to imagine the start of this communication could be through light responses that equate to “yes” or “no”. 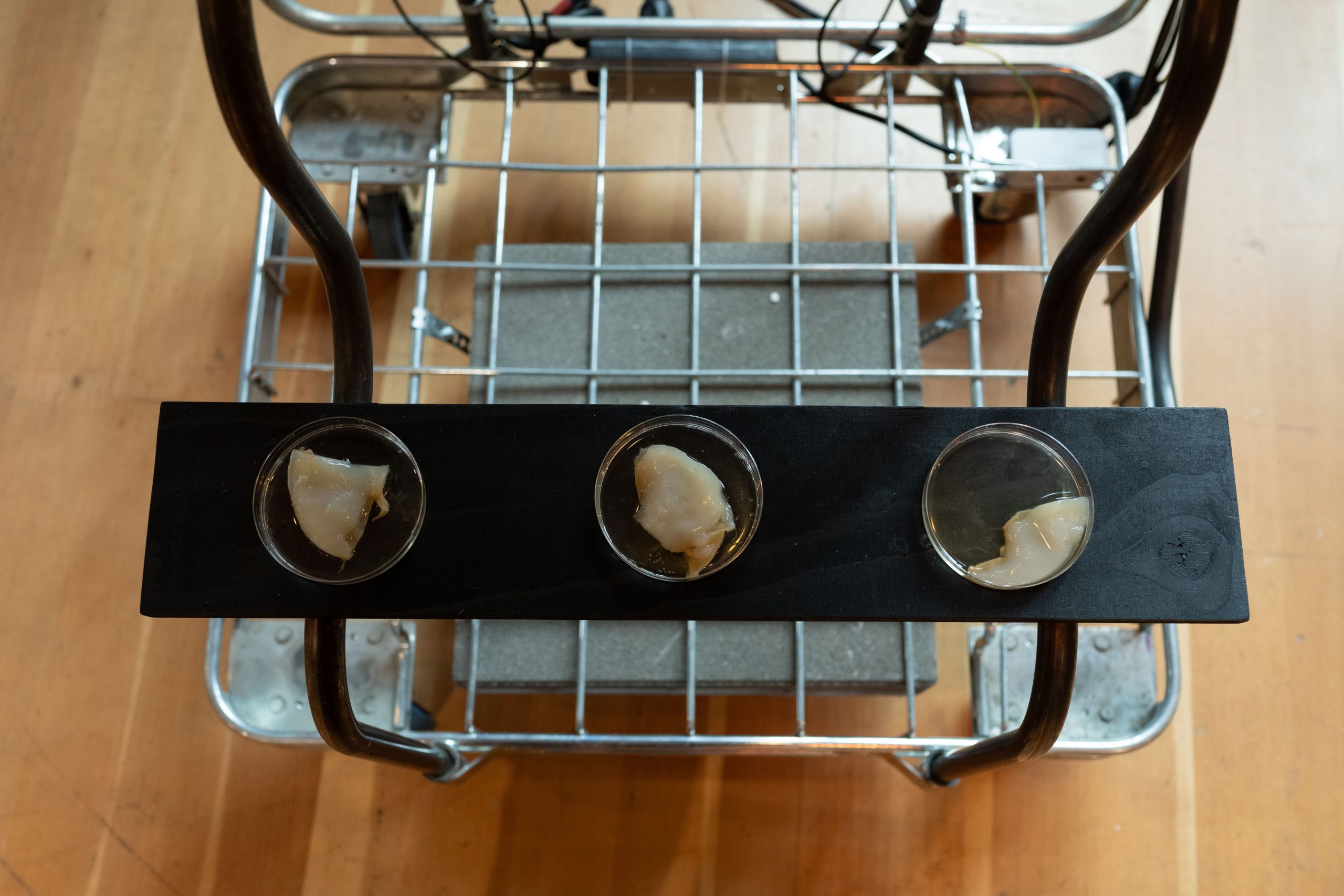 Presentation of Human Bacteria Interfaces at the Driving the Human Festival, October 2021

Anne-Sofie Belling, Bea Delgado Corrales, Romy Kaiser and Paula Nerlich met at the HBBE (Hub for Biotechnology in the Built Environment) in Newcastle, UK. Working interdisciplinary with backgrounds in Creative Technology, Material Design and Microbiology, the collective is now moving towards the field of Biodesign. Constantly translating between the languages of multiple disciplines, they state throughout the process that “there are always different foci in the foreground – so every perspective takes a lead at a different time”. They describe this process as shifting “between checking on the biological requirements – pushing it towards the impossible speculative concept in application and then translating it back to biology again, merging it into a feasible future-scenario.” Through working back and forth, Belling, Delgado Corrales, Kaiser, and Nerlich are not just able to start or finish with a biological perspective, but adapt conceptual design ideas in response to the lab process. As important questions throughout the process,  the collective outlines: “Is this biologically feasible? How would this be translated into future applications?” or “How does the process actually work on a molecular level?”.

Beyond producing the biotechnological framework for their sensor prototype in the lab, the team behind the Human Bacteria Interfaces project is committed to create more relational bonds and awareness around the biological phenomena we already coexist with. By displaying their ideas visually and designing workshops, the collective aims to communicate the many ways in which we are already entangled with bacteria now. This serves as a ground to collectively imagine how those relations might be shaped in the future. The collective is framing the focus of their workshops and displays as a blend of science communication with “still letting people feel and experience how it would be to interact and live with ALI, an ‘ambient living intelligence’”. 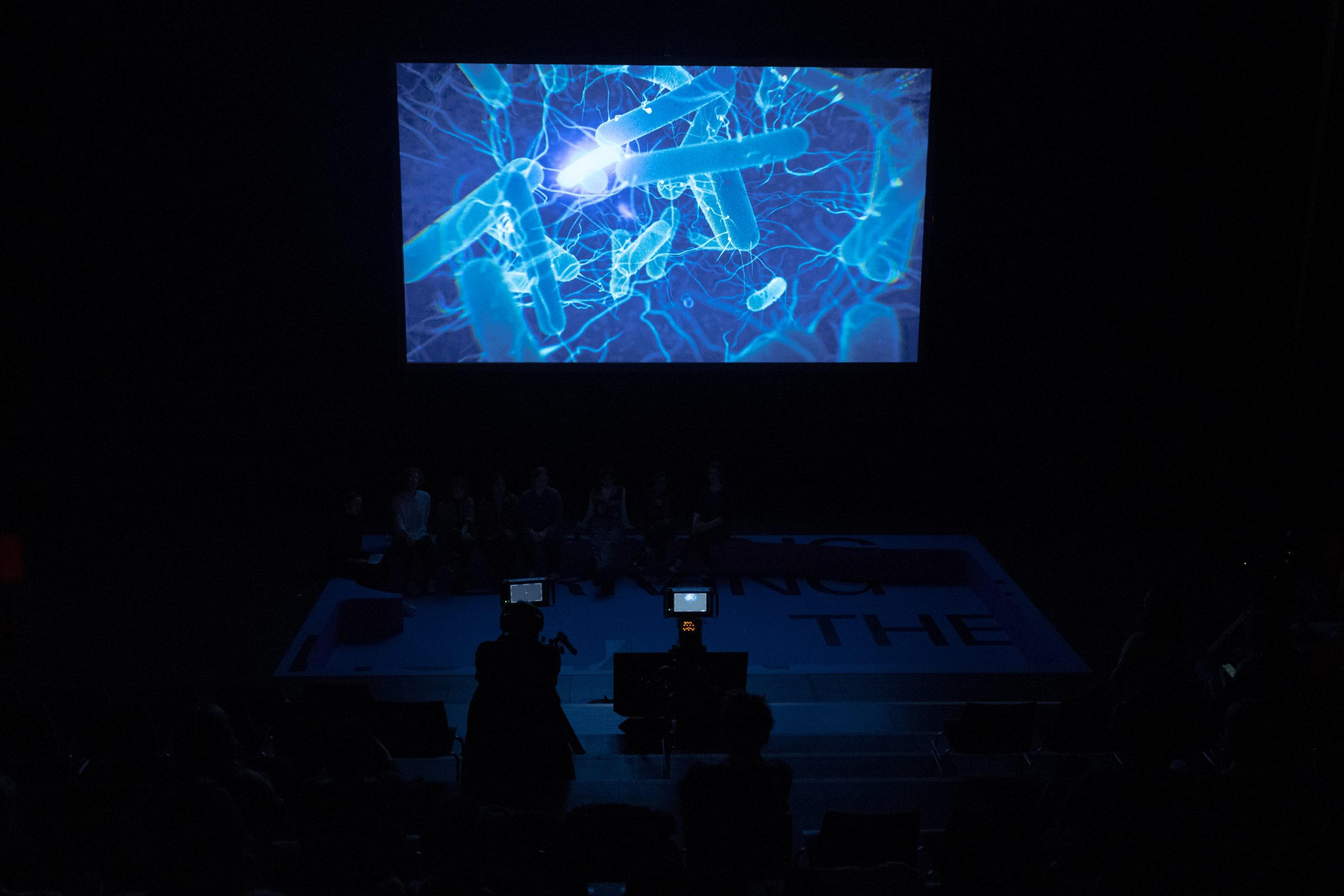 A still of the Human Bacteria Interfaces film at the Driving the Human Festival, October 2021

The collective states that “by living together with something alive” we might be able to “train ourselves in implementing and valuing the ‘act of care’ again”. ALI is aimed to become a technology to attune into the bacterial scales of our environments and integrate them into our daily lives. Through the knowledge we acquire living with such different life forms, the collective hopes we learn to extend these “acts of care” to living beings we haven’t considered before. While developing the ALI prototype, they are also prototyping a way of interdisciplinary collaboration between biotechnology, art, and design. The team behind the Human Bacteria Interfaces project is always circling around the question “Is this a fantasy for the future or perhaps already possible today?”