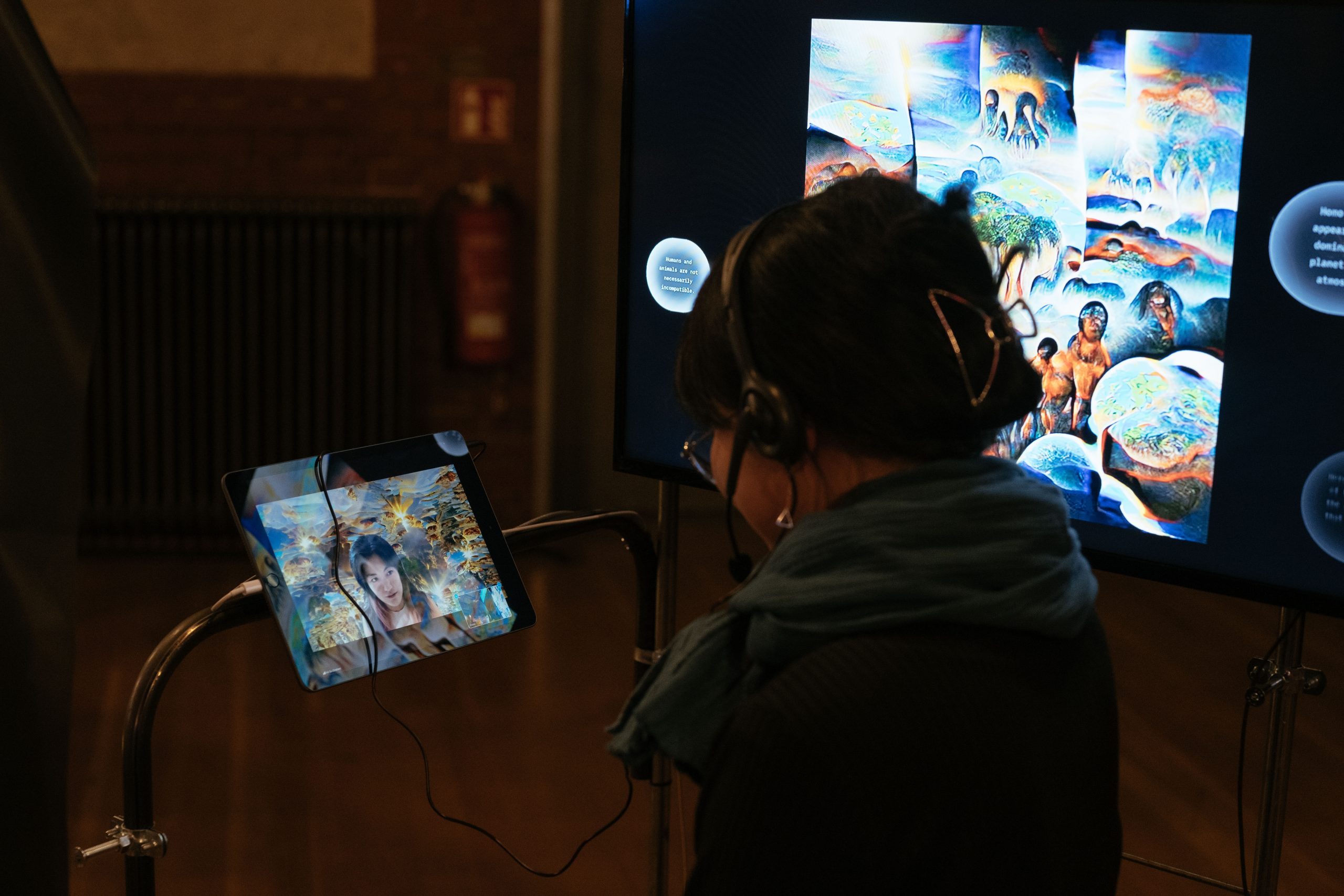 Installation of ’Do AIs Dream of Climate Crisis?’

Following her presentation of ‘Do AIs Dream of Climate Chaos?’ last October we had a conversation with Iris Qu 曲晓宇 on how her research is leading her into new directions, speculating how the future of artificial intelligence is intersecting with the climate crisis.

Qu’s first approach to the project was to analyse how algorithms process existing data on climate change. This resulted in the 10-minute video Do AIs Dream of Climate Chaos?, which Qu describes as  “a climate fiction written by machine learning algorithms”. A machine learning script scanned through all texts included or linked to the Wikipedia page wiki/Climate_change and built up a dataset containing about 270000 articles. This served as a training set for the language processing algorithm GPT-2, which synthesised sentences based on the given data, for example:  “Human society and forests influence each other on the molecular level”. With a generative adversarial network (VQGan + Clip method) this text-based story was turned into a sequence of morphing images. They depict surreal shifting landscapes and figures that Qu  recorded and transformed into the video. Ultimately,  Do AIs Dream of Climate Chaos? investigates the agency of a system and asks questions like: “given sufficient data, what kinds of value systems will be programmed into AI systems? What would an intelligent algorithm optimize for amidst a climate catastrophe? How much agency does the system have on its own?”

After seeing the video during its October presentation at the Driving the Human event, artist Marc Lee reached out to Qu to collaborate on a new project that extends her experiments in computational fictions. YANTO – yaw and not tip over is a collaboration between the two artists and sound designer Shervin Saremi. Yanto is a sci-fi experiment that “imagines a speculative aquaculture farm 30 years from now where artificial intelligence is used to create and optimize synthetic species to withstand the increasingly hostile ocean environment.” Some of these imagined species include 3D-printed underwater robots in the shape of a codfish, king crabs with 3D-printed shells made with lightweight plastic or genetically modified shrimp with kelp DNA. A mobile app serves as an interface for the visitor to perceive this aquatic ecosystem, from the point of view of an AI simulator. Through the lens of machinic recognition the work looks at the tensions between ecosystem health and profit, constructing what Qu calls “narratives of an uncomputable system under extreme control”.

Science fiction, computational control systems and the mapping of ecosystems reappear in her current work process, developing a prototype for the upcoming Driving the Human public event in November 2022. She is currently following two strains of research: one mapping the physical locations of algorithms and one building the narrative for a futuristic village governed by an AI agent. The village will simulate the power dynamics and gamified structures of a central artificial intelligence that strives for a “maximum survival index”, delegating tasks and resources to humans. “AI plays the role of a governor, an assistant, a survivor,” says Qu, “while its human counterparts play the role of caretakers and components of a hive mind.” 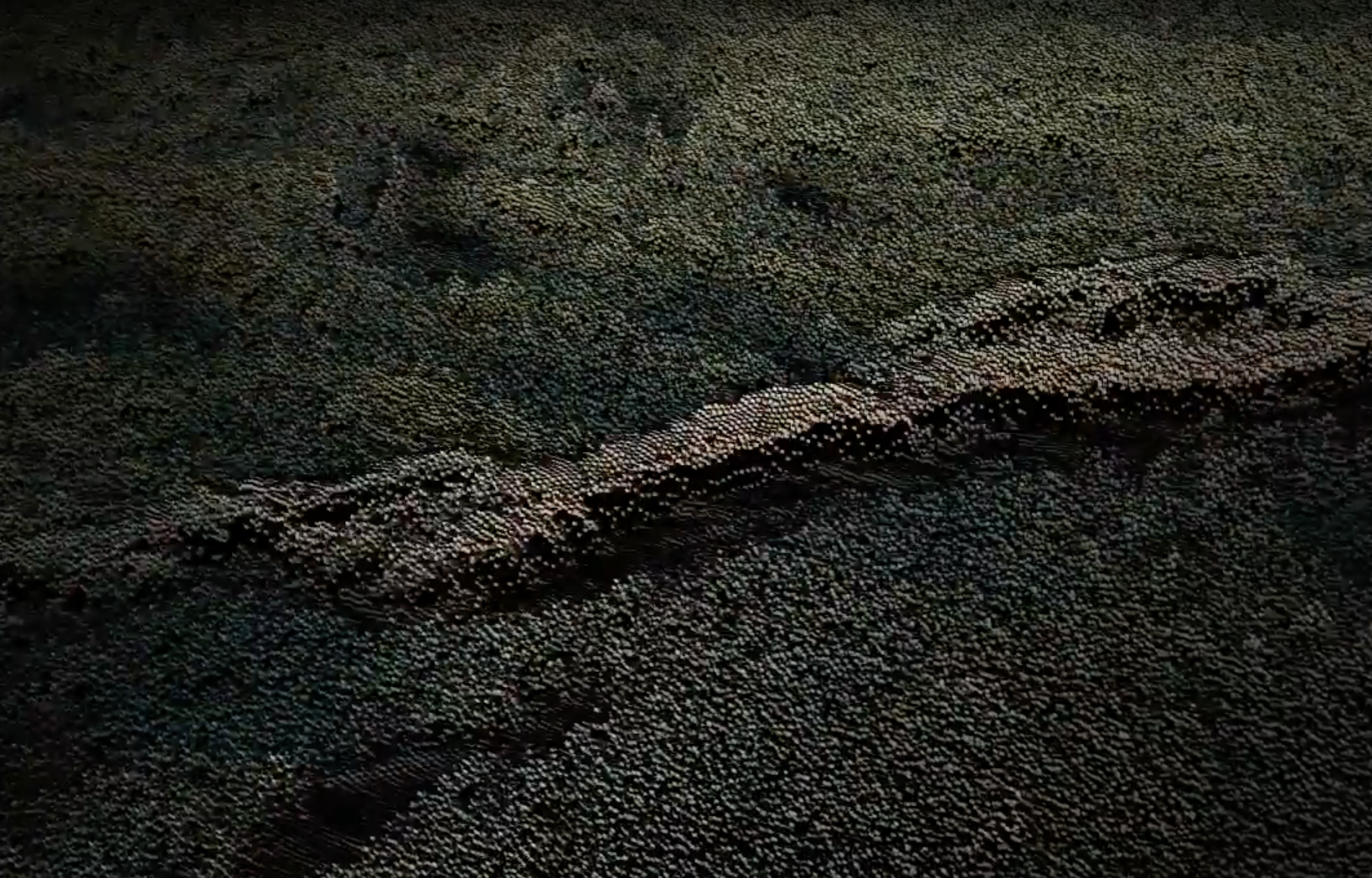 Contextualising the consciousness and agency of AI agents, she is also looking into the physical infrastructures of algorithms. “In order to reach a general level of intelligence,” Qu states, “a system will need to understand how it’s situated in the environment.” This situation is inevitably linked to an extensive hardware infrastructure, such as “electrons exchange in data centers and server farms hidden in landscapes around the globe.” Through researching the physical locations of those tech-architectures the algorithm communicated with while it ran, she is mapping a network that usually stays invisible behind digital interfaces. Qu is pointing towards the fragility of technological infrastructures, as they depend on disappearing ecosystems and critiques techno-solutism. “I want to question how much agency we share and possess over each other in a ubiquitous, goal-oriented, technocratic system,” she concludes. Qu is thinking through the consciousness and agency of computational systems deeply interwoven with our daily rhythms, considering AIs perception of existing climate data, its application in ecosystems and the physical embodiment of the algorithmic infrastructure itself. Through showcasing the many ways artificial intelligence is already intertwined with our ecosystems, she invites us to speculate the many possible futures it may inhabit.